Monday morning, Marion and I headed up to Ognaheia. Sandwiches and coffee and some Norwegian scenery. I was feeling good. 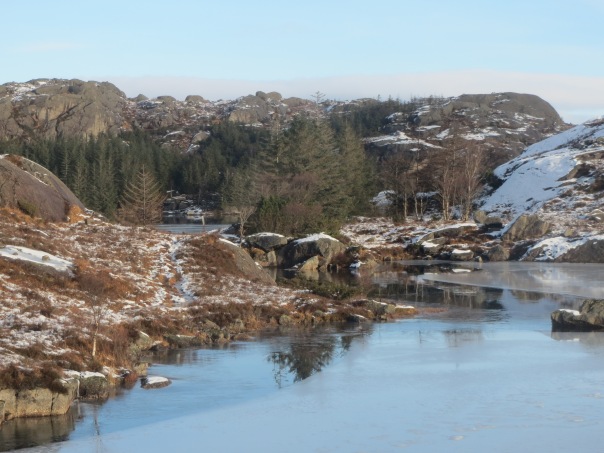 Monday night saw Marita, Jacqueline and me heading into Stavanger for some Continuing Professional Development (CPD). VetScan (the diagnostic imaging company, which carried out the MRI on Lusi) will be starting up in Stavanger later this year, and Stavanger Smådyrklinikk had invited a speaker from the UK to come and talk to us about CT scans. Although it was interesting, it went on later than I had thought, and as I drove home at eleven o’clock, I found myself feeling unusually tired.

Tuesday morning dawned, and I was still tired. I couldn’t really understand this, as there was nothing obviously wrong, so I drove to work, and dragged myself around, trying to find some enthusiasm for cleaning. I realise that enthusiasm for cleaning sounds almost like a contradiction in terms, but usually I find an odd enjoyment in it at work, but on this day I was very relieved when Magne claimed me to help him with an operation.

The patient was a young Yorkshire Terrier, which had an inguinal hernia, and happily for me, her anaesthetic was very stable. It’s always a relief when the oxygen sats remain steadily between 98 and 100 percent. I found myself watching Magne as he carefully worked around the defect, meticulously dissecting away some protruding fat and tying off the larger blood vessels. Having closed the hole, he turned his eyes to me and smiled.

‘What are you thinking?’ he asked.

I confess that at that particular moment, I wasn’t feeling all that well, and what I was actually thinking “I wonder if I passed out, whether Magne would attend to me first, or whether he would stay sterile and just call for someone to help me”, however it seemed melodramatic to say that and my brain seemed stuck. Faced with my dumb silence, he fortunately made things easier for my befuddled mind.

‘What do you think? Is it closed?’ he clarified. With relief, I said I thought it looked good, and he continued with the task of closing up the wound. I don’t know whether  Irene sensed something was wrong with me, but happily she came into theatre and gave me a hand at the end of the op. I was very glad she was there, as I just felt dysfunctional.

Of course, after twelve, I have started to consult. Fortunately the flow of adrenaline did seem to help a little. It was another male dog with urinary tract problems, and so at least, after last week, I felt I had some idea of what I was looking for. Before they arrived, I went into the consulting room that Magne usually uses, and tried to sit down. Somehow as I tried to hoist myself up, the chair slipped away from me, and I sat down very suddenly on the ground. Limping through, I found Marita.

‘Have you broken your tailbone?’ she asked. ‘Do you call it a tailbone in English?’ I was able to assure her that I hadn’t.

‘It’s only my bottom that’s broken,’ I told her. I didn’t enjoy the consultation. I don’t feel it went very well, which I guess wasn’t surprising under the circumstances, but I do know that with Wivek’s help, everything was done very thoroughly.

Wednesday night was really odd. I had felt unwell most of the day, and the night was riddled with weird dreams. At one point, I dreamed that Magne was sweeping the floor, and with admiral logic, I worked out that I must be dreaming. After all, I concluded, Magne never sweeps the floor. Having at some level congratulated myself for my deductive abilities, I went back to sleep and for some reason Magne made another appearance, but this time he seemed to have gone crazy. This time I was more confused. I couldn’t be sure that I was dreaming as although I could be certain Magne wouldn’t sweep, it definitely didn’t seem impossible that he could go mad. With hindsight, the fact that Magne’s irrational behaviour involved turning over a table and sitting cross-legged trying to fish in the underside of it using a rod made of spaghetti might have been a bit of a giveaway. I think possibly I might have been a bit feverish at that point.

Suffice it to say, I didn’t go to work yesterday. I wasn’t looking forward to phoning in, but Irene made it easy for me.

‘Have you got the flu as well? she asked. ‘Dagny has been struggling with it all week.’ I don’t know whether it’s flu, or some other virus, but I am certainly exhausted. So if you have read all this, and it doesn’t make much sense, then I can only apologise that you have wasted the past five minutes. Still, at least I have made it out of bed today. Maybe by next Tuesday, I will be smart enough to start consulting again. For the moment, daytime TV is beckoning. Have a good weekend.