We do get asked some bizarre questions now and then. This weeks prize goes to one of Jan-Arne’s clients, who wanted to know whether we could do a test to see if his dog was gay as he had failed to show interest when presented with a bitch in heat. Although he was almost certain, Jan-Arne, conscientious to the last, came to check with me and invited me into the room to look at the patient. Of course, there was nothing significant to find.

‘He just doesn’t like women,’ his owner commented to me after I had checked out his pet’s (entirelly normal) testes. It crossed my mind to reply that his dog seemed to like me perfectly well, but he seemed like a lovely man and he had been kind enough to speak in English after all (one of only two non-British clients who chose that path this week).

‘Some men just don’t.’ I replied with a shrug. ‘It’s nothing to worry about.’ Of course, it may be that given another bitch, his dog might change his mind. Love can be a fickle thing.

It has been a week of contrasts and working every day this week has meant I played a full part in all the drama at both ends of the spectrum. It is often the case that when a very old pet is reaching the end of its natural life, there comes a time when it needs a great deal of care. Sometimes just how much is brought home to an owner when they are faced with the decision of how to find someone to take responsibility for their animal during the vacation. It isn’t always possible. Even if you choose to take a holiday where your pet goes on your journey with you, it isn’t always suitable for an animal that is nearing the end of its life to travel at all and sometimes difficult decisions have to be made. The contrast to this has been seen in the number of kittens I have seen this week which have been found and adopted by their finders. The real generosity of some of our pet owners is deeply heart warming.

There was no sad ending for Ludwig, a delightful young Cairn terrier. Ludwig first arrived at the clinic on a Sunday evening, vomiting and in agony. After initially thinking that his pain was abdominal, Marita quickly discovered that poor Ludwig was actually suffering from a testicular torsion. He was given strong pain-killers and his excruciating condition was resolved by careful castration of the affected testicle.

To Marita’s delight, when he returned on Tuesday, as soon as Ludwig saw her across the waiting room, he  launched himself towards her and greeted her with delight. It has often been a source of rueful irony to me, that having loved animals enough to become a vet,  so many of them regard me with at best, suspicion and at worst, fear and dislike.  The only times I have seen this truly reversed was in the emergency clinic. It happened enough to convince me that when an animal comes into the clinic in real genuine pain, and you are the person who gives them relief, then there is no doubt that they feel grateful. I think anyone experiencing this would be left in no doubt of the complex nature of a dog’s consciousness.

I asked Ludwig’s owner if I could take his photo for my blog, and as he was too busy sniffing around the consulting room to pose, Marita picked him up for a cuddle. He immediately took advantage of the situation by kissing her most enthusiastically. Despite the fact that Marita likes him very much indeed, I’m not sure she enjoyed the experience as much as he did. 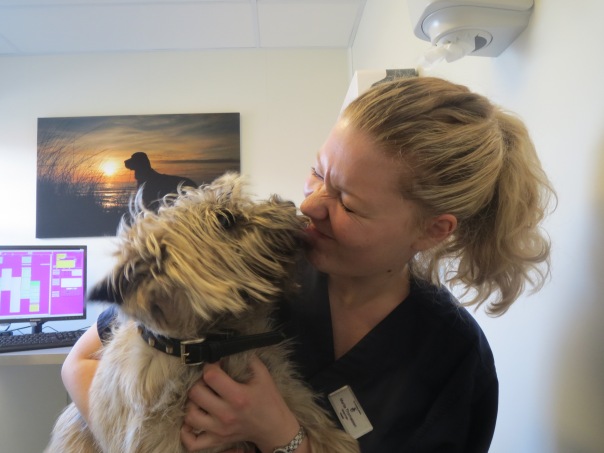 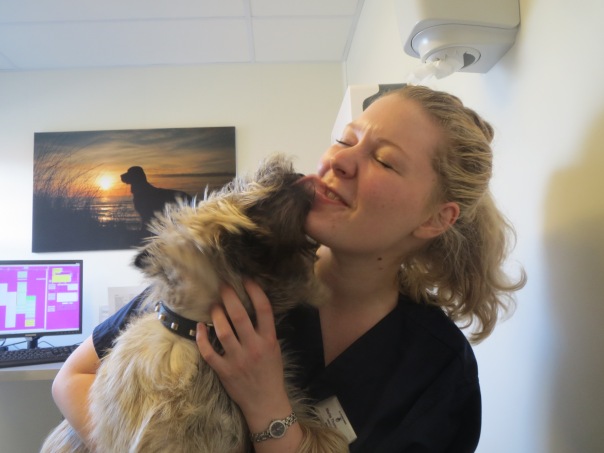 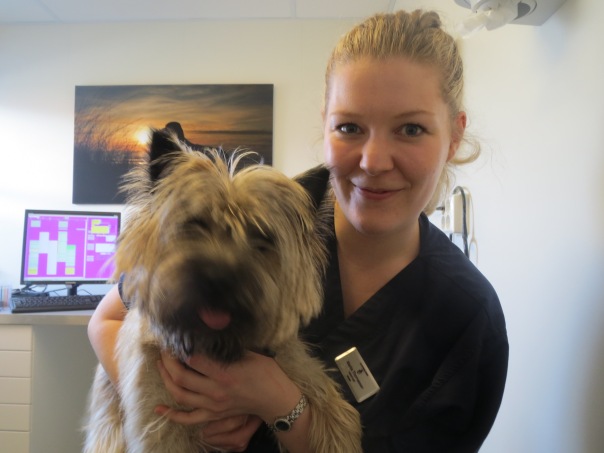 Still, understandably, she was both happy, and delighted with his reaction. There are few things better than knowing you have done a great job, especially when the result is seeing a lovely young animal make a full and happy recovery. If they like you as well, that really is the icing on the cake.

Todays featured image is of Turbo Trine, Irene’s lovely dog, who had been in to have her teeth cleaned.